How important is charity in YOUR lives?

Currently, it is fair to say that many adults think that young students do not take part in enough charity events in the UK. There is a stereotype that children do not know enough information about charities, leading to them completely ignoring something that they need to be involved in. But Reading School students want to change this.

Are Students Aware of Charity Events?

Looking at the most important perspective, the students’ view, 91% of 53 students we surveyed for BBC Young Reporter, agree that children should be more aware of charities and what they do, with one student saying that charities, “Make people aware of not only how much the world can be helped, but also how privileged we are, and that we should help the less privileged population of the world.” Ben, the head of the charity committee run by students in Reading School, feels that, “Charity is a big part of Reading School,” with a steady increase in the number of students taking part in charity events over the years. Many students have ties with local charities because their families are part of them. For example, Balendran, who lives in Woodley, is the head of a charity called Path to The Future, which helps underprivileged families. He agrees with Ben and believes that, “There is quite a lot of awareness among children and the people supporting them, but this awareness could increase with various different methods.”

Do People Believe that Charities can Help Develop Character?

Most people will say that character is something that all schools want to build, and many think that helping in charities is the key to this. Among Year 7 and 8 students at Reading School, 87% say that charities will develop their character. One student gave a very thoughtful response about charity events, saying that they allow him, “To see the different conditions in which others live”, letting him understand their lives and appreciate his own. Ben also agrees. He talked about, “Students’ perspective, humility and interpersonal skills,” improving when children take part in charity events or are part of charities.

Do Charity Organisers Feel that Children will Fit into the Charity Spirit well?

Balendran strongly agrees with the fact that many charities need as much help as possible, with “Children fitting into the scheme of things in a charity very well” and that children would definitely enjoy the experience. Even though Ben does not run a charity, he knows what it is like to be the organiser of an event, and stated that most charities are non-profit and, “Need as much help as possible.” He also added that, “Even if children do small jobs, it could be hugely beneficial to charities.” - children tidying up after events could help charities much as actually running the event.

Students felt that they would enjoy certain types of charity events. One pupil commented that his favourite event would be, “Running a stall, because as well as attracting people, you get to socialise with people as well.” Balendran feels that, “Students will enjoy taking part in events because it is a different experience for them which will be useful later on in life.” Ben completely agrees with Balendran. He believes that they would enjoy charity events because, “Completing a charity event successfully feels so rewarding, organising and leading it feels so satisfying.”

How Would Charities Encourage Students to Take Part More?

Many charities want to find ways to encourage students to take part more, like with Balendran, who thinks that, “Social media, schools and parents are some of the best ways of encouraging students to take part in charity events,” adding that, “This is because they are huge parts of people’s lives and they can demonstrate the importance of charity, hence inspiring them to involve themselves with charity.” However, Ben has a completely different view on this – he thinks that it is better to, “Encourage them by telling them to find a topic of passion, and search up charities related to that passion, taking part in as many of their events as possible,” which is telling the students to do their own research related to what they like or dislike. 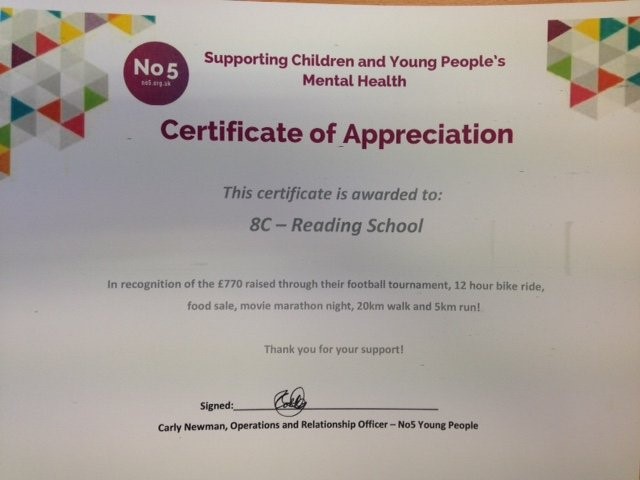 Do students feel that they should take part in more charity events?

This is an issue which provokes quite contrasting opinions. One student felt that “The school should introduce more events because they are only helping a few charities and support would be welcome in countless others,” while another student thought that, “The school produces a lots of donation money already from events like Non-Uniform Days, House Charity and other charity events such as Children In Need,” which reinforces the fact that charity is very important at Reading School and that the school already does a lot of charity events every year.

Students believe that charity should be a greater part of their society and schools in general. They understand the benefits of charity events, like helping to build their character and encouraging them to try out new things in life. They also think that social media and schools should encourage other students, who may not know as much about charity, to take part in charity events, raise awareness and allow them to understand why charity is so important. Charity achieves so many things, and students in Reading School want to be involved in changing the future of millions around the world.