Are The Roads Around Your Home And School Safe?

The Royal Berkshire Hospital earlier this month released a study revealing that there has been a 45% increase in accidents involving children and vulnerable pedestrians walking in Reading between February 2018 to 2019. Now, many students may not feel safe when walking in Reading.

The Royal Berkshire Hospital earlier this month released a study revealing that there has been a 45% increase in accidents involving children and vulnerable pedestrians walking in Reading between February 2018 to 2019. Now, many students may not feel safe when walking in Reading.

Reading School’s BBC Young Reporters conducted their own poll of fifty students which reinforced this point and revealed that 76% worry how secure when commuting on foot to and from school.

During the most busy periods immediately before and after school starts and finishes, Reading School boys face danger from motorists who violate the Highway Code. Simon Beasley, the Network and Parking Manager for Reading Borough Council, told us that six hundred and thirty three tickets were given out in January 2019 for offences such as parking on double yellow lines. Our eyewitnesses have told us that it is this kind of careless driving which can often pose the biggest threat.

Thirteen year-old Joel told us: ‘I was running along London Road, in the centre of Reading and a white van pulled up onto the double yellow line beside me, without looking and his wing mirror hit me in the back, however I am lucky he wasn’t going too fast.’

A similar experience was outlined by Kush, a Year 8, ‘I was walking down Queens Road and a car pulled up on a double yellow line, opposite another car parked on a double yellow line and the road was blocked. This was a major issue as many cars were trying to perform U-Turns to escape the traffic. I saw a pedestrian who nearly got ran over by a car pulling onto the curb to turn around’.

The effects of this behaviour can be seen in the morning when commuting motorists going might not stop at red traffic lights, or park dangerously to drop people off at their destination faster. According to Royal Society for the Prevention of Accidents (RoSPA) in 2017, five hundred pedestrians under the age of sixteen were killed or seriously injured in accidents from 7:30 to 8:30 am, and 3:00 to 5:00pm on a school day. Also, nearly one third of child pedestrian casualties were on their way to or from school at the time of the accident.

There are three main types of collisions on roads: pedestrian/cyclist collision, a side impact collision and a head-on collision. The Road Safety Foundation provided our BBC Young Reporter team with evidence that pedestrians and cyclists are more susceptible to injury even at lower speeds. 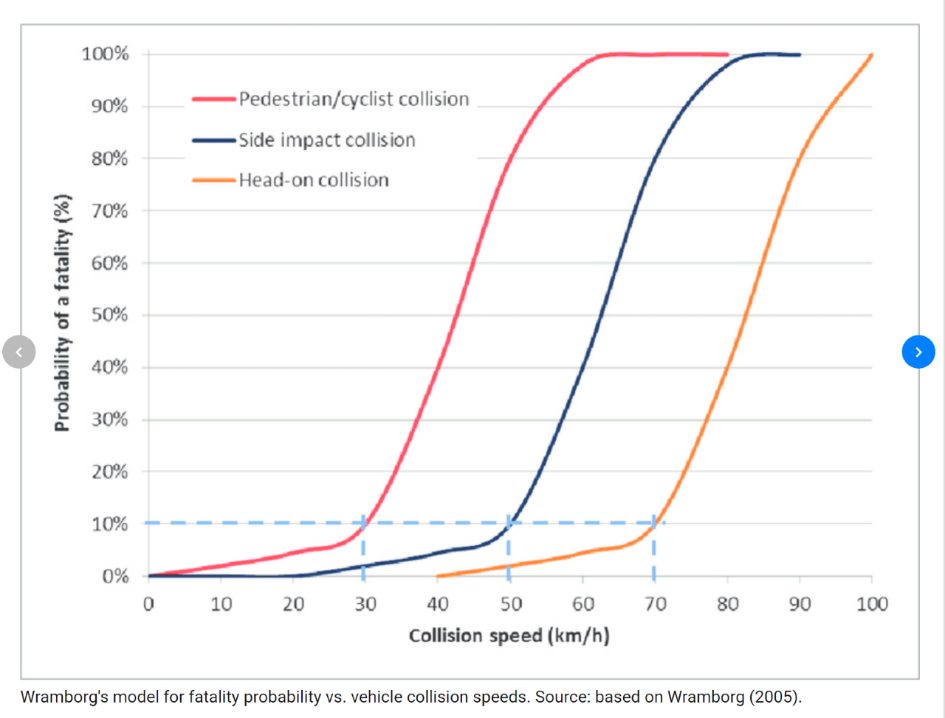 A graph showing the probability of fatality for motor accidents

Reading School’s Head Master Mr Robson has recently given students advice on how to keep themselves safe when walking home, recommending that they do not take out their mobile devices and instead pay attention to their surroundings. RoSPA also says that young pedestrians should wear reflective clothing during winter months and practice the Green Cross Code.